I've said it a million times but Christmas is so much fun with Elinor. Watching her little face while she looks at lights or see Santa, it is so sweet. After Pop pops on Christmas Eve, we drove home and she passed out. We put her to bed and got to work setting everything up. We got to Facetime with the rest of Dave's family (in Japan) while we got to work. We had so much laughing with everyone and putting toys together. 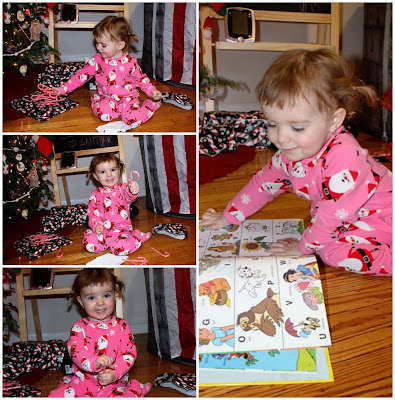 Santa brought too many candy canes! 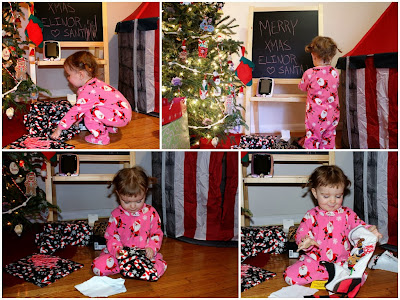 In the morning Elinor came running to our room like every morning. I told her Santa came last night and if she wants to go downstairs to see what he brought her. She said " yes! Candy cane!". As soon as we got downstairs she saw her chalkboard and started drawing right away. It was a good few minutes until she realized the wrapped gifts under the tree. It was so much fun watching her open each one, inspecting it, playing a little and then moving on to the next. 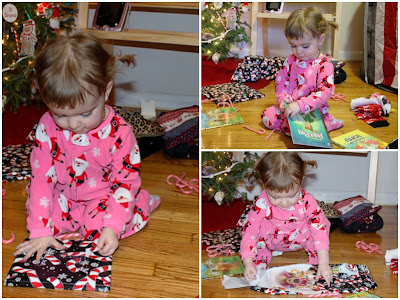 I thrifted a bunch of books and even a toy story coloring book that looked brand new. Dave bought some old golden books off a friend from her instagram. Elinor was so excited about them. I set up her puppy bed from last year in her tent. We laid in there reading all her new books. It is so cozy in there! 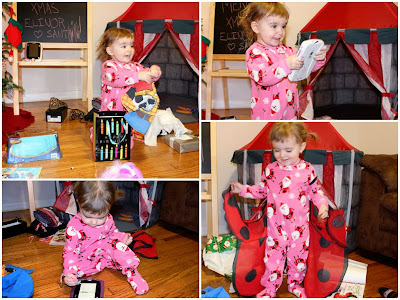 Mid opening gifts, I forgot some thrifted woody pjs I had in the dryer. I stuffed them in a birthday gift bag really quick and gave them to her. She also got a leap pad (thanks amazon for an awesome few hours sale!) that she has been using as her camera/coloring book. We showed her how to play some games but she would rather take selfies and color. I need to figure out how to get her art off of it because she has some awesome work on there already. Dorie and Henri sent her these ladybug wings. I've never seen dress up wings like these ones before. They are so cool.

We had said we were only getting Elinor one big gift this year. We went overboard for what we wanted but so much of it was thrifted or on super sale. We spent way less than our budget and still had an overwhelmed kid with all the gifts she got. Now to start taking care of the clutter in the playroom...

Have a safe and happy new year's eve! To get a fresh start, I'm having a super sale over on Etsy right now ending Jan 6th. Use coupon code newyear

Email ThisBlogThis!Share to TwitterShare to FacebookShare to Pinterest
Labels: christmas, christmas morning, christmas on a budget